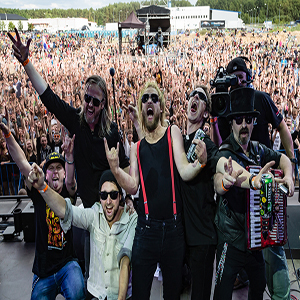 Finnegan’s Hell was formed in 2010 simply because there is still a great need for Celtic punk in this world. Prior to starting the band the members were involved in various other groups playing Irish folk, rock and punk. To combine the different elements somehow seemed like a good idea.
After putting together a decent setlist Finnegan’s Hell ventured on a club tour in Scandinavia, which was followed by a bunch of festival gigs. The songs went down well with the audience, so the band decided to sneak into the studio to lay down some tracks. An EP was finally released in 2011. It received rave reviews and sold out in no time. More important though, it also meant the possibility for the band to play all over Europe.
Finnegan’s Hell has just released a full-length album through Heptown Records, Europe’s leading Celtic punk label. The album ”Drunk, Sick And Blue” features original material for the most part, but also include some traditional songs that translate well into punk. ”Drunk, Sick And Blue” has a more dynamic sound than the old EP, since the line-up now includes accordion. The new album can be bought straight from this website.