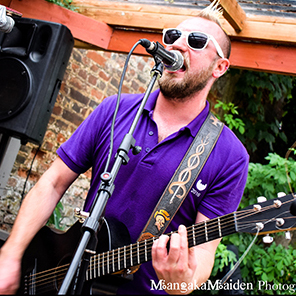 G La Roche is an incredibly versatile guitarist, singer, comedian and entertainer hailing from Hertfordshire, just North of London. He is famous in his hometown for organising the biggest free music festival in the region and has taken his act to Japan, throughout Europe, Scandinavia and all over the UK. He has recently been building a fanbase in Denmark and Norway who appreciate his rock style of acoustic performing. Artists most likely to show up in his set include hard rock bands like Queen, AC/DC, Metallica & Tenacious D, but he keeps his set varied with acoustic renditions of everything from Eminem to Elvis to the Prodigy. Anything 50s up to 2000s is catered for including Pop, Irish, Reggae, Rap, Dance, Country, Prog Rock and Punk. G La Roche loves to give an energetic performance and drops in plenty of sing-a-longs, dancefloor fillers and challenging songs that never fail to entertain. His stint in stand-up comedy means he can engage with the audience with a cheeky panache. Enthusiastic and engaging as well as approachable and polite.