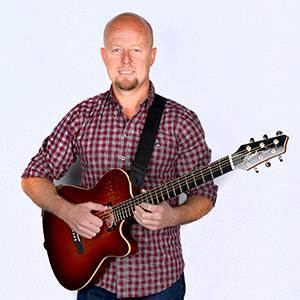 Nick Ennis from South Africa has played in Europe since 1996 and in bars and ships across Scandinavia and the UK. Having been based in the UK for 11 years, Nick toured continually through the South of England.

Based in Stockholm since 2007, Nick has played most of the Irish bars in Sweden, Denmark, Finland and Norway.

Since 2009 he has been a regular on Stockholm/ Helsinki Cruise ships, performing ca. 50-60 nights a year. His repertoire covers all the pub favorites, hits old and new, and a few surprises thrown in.

Nick plays Steel String Acoustic Guitar, sings, and if requested can also perform gigs using backing tracks. These are subtle drums and bass to compliment the songs.No Karaoke overload. The goal is to get the crowds dancing the night away!

Music covered, ranges from the 60’s all the way through to this day. From Abba to Yazoo !

Having been a regular artist for BrophyBookings over the last 6 odd years , Nick is a seasoned reliable traveller and entertainer.Most of the venues require an upbeat show with a bit of humour thrown in, so get to a  gig and catch up with Nick or any of the international musicians Brophy Bookings.