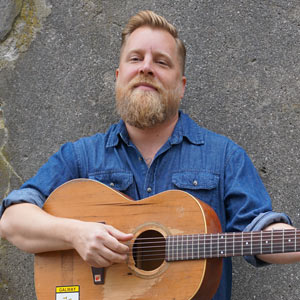 Bobby McBride is an American born entertainer with an extensive background in performing, recording and living music over his 25-year stage career. Raised in North Carolina – Bobby’s background was simultaneously rooted in Classical, Folk and Punk music. After attending conservatory and studying Trombone and musicology he took the somewhat more uncertain path of facing the wolves to become a songwriter. The journey first led him to deep in the Appalachian Mountains where he lived in a rustic cabin and absorbed the regional traditional folk music. His adventures led him across the states, striking up a friendship with Nashville Session musician, Bobby Farrell in New Mexico – whom allegedly rode boxcars with Woody Guthrie during the great depression, passing on a few tricks to an eager and history-loving young Musician. Farrell was just one example of McBride’s constant hunger to find his own source of musical inspiration.

Later, as a young adult – McBride chased his spiritual roots to Galway, Ireland where he would become a street musician, actor and erstwhile raconteur. McBride made his living busking, hustling and picking up stage roles in youth theatre productions. This led to him becoming music director of “The Irish Actors Theatre Company” for a season and touring the continent. After subsequent solo touring, McBride laid his hat in Denmark. Since residing in DK, Bobby has been active both as a solo performer and recording artist, and as a studio musician and as a member of the band Bonnie Cried – who have achieved critical success and recently signed a record contract for their debut album.

Bobby’s live shows draw upon any and all of his adventures – blending together his love of the stage with his passion for all types of music. In an evening you might expect to hear Irish Folk, Country, Punk, Rockabilly, New Wave, Indie and everything in between. Always with a twinkle in his eye, some good banter and a skip in his step. A night not to be missed when he visits your town.