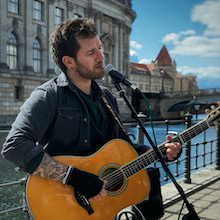 CIARÁN SWEENEY comes from a musical family has been singing from an early age. He would join his father in Bars as a teen(he is a performer also) and sing songs throughout the night with him. I found my true love for performing while traveling Australia and NZ going from hostel to hostel and performing for all different nationalities over a 6 year period (while also working as a carpenter).

Ciarán finally became a full time musician when he returned to his homeland, Donegal-Ireland and started to perform in venues across the County. In 2017 he made the move to Berlin and have since been performing in Irish bars, restaurants, corporate events, weddings and also busking on the street.